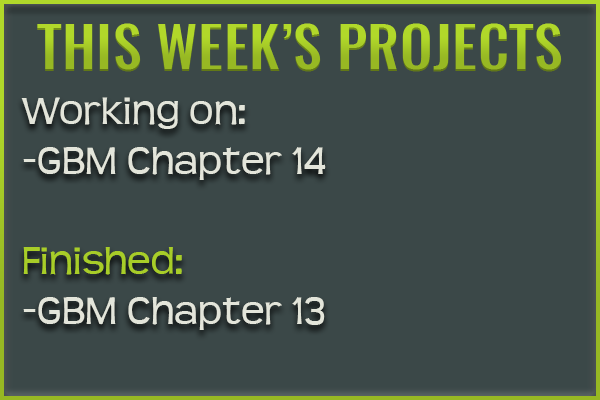 It’s fun to spot a storm coming on the horizon, and as a writer, it’s equally fun to write about one approaching. Include some foreshadowing, maybe subtle, maybe not, show that an altercation is going to happen sooner or later, and put it in the oven for about 20 minutes. Presto, a recipe for disaster. It’s a lot of fun to write about foreboding danger. Writing the actual altercation going down should be a lot of fun given this, but it actually feels really hard to execute.

Along with books, I’m also into TV shows a lot more than movies – maybe that’s where my episodic style of writing comes from. I was reminded this week of a complaint a friend had about TV writer Steven Moffat, who wrote the TV series Sherlock, as well as a few seasons of Doctor Who and the Adventures of Tintin movie. They were pointing out that Moffat has a bad habit of referencing and reinforcing grandiose schemes and events, and talking up his own characters, good and bad, without actually delivering on those events and themes. In Doctor Who, he’ll give characters big speeches about how the Doctor is the most important and smart person in history, and yet we don’t ever really feel like we see the Doctor do anything to earn such a reputation all season. At first I figured this was just him forgetting to do it, but now I see it might have been too difficult for him to properly insert a scene of such caliber. A big rule to keep in mind – if you’re writing a character that’s cooler, smarter, or just overall better than you, the writer, you’d better do a good job selling that character, because you’ll have a hard time doing them justice. (I want to talk more about writing characters smarter than you, but I’m going to leave that for another blog.)

The Good, The Bad and the Molly has been nothing but a series of ‘oh shit, this is going to hit the fan soon’ over and over. Given this, I’m not going to lie, it’s been hell to write. And rewrite. Over and over. I talked before about being a spectator and not a puppeteer in my writing, but sometimes my mind gets cloudy. I’ll write a chapter, read it over, and go, “I must have seen it wrong, this feels wrong.” Then I’ll scrap it and do it again. The whole chapter. This chapter’s final scene was a doozy to write in this way. A lot of the stormspotting I’ve been doing in the whole story has led to a few conclusive moments – when Aaron confesses to Molly what he’s been doing to her, that was a huge one, and now this. The end of chapter 13. We’re post-fan-shit moment. It’s hit the fan, and now the story has to do what I feel a lot of stories are kind of bad at doing – acknowledging. I’m not necessarily talking about characters having to have a conversation about what just happened – you may notice sometimes I leave important conversations to have happened in implied hindsight. Largely that’s often because the conversation would have gone exactly as you’d expect and give you no new information and that can get dry really quickly.

But that does not mean the story can’t acknowledge a shift. When the genie is out of the bottle, it has to bring consequences with it, otherwise it feels like your story was leading up to nothing. One thing I’ll need to keep in mind is to acknowledge what has happened in the story and acknowledge it properly. If nothing else this story in particular has been a giant reminder for that. The storm was spotted and has run through the village. Now it is my turn to acknowledge it. I’ll talk to you all next week.