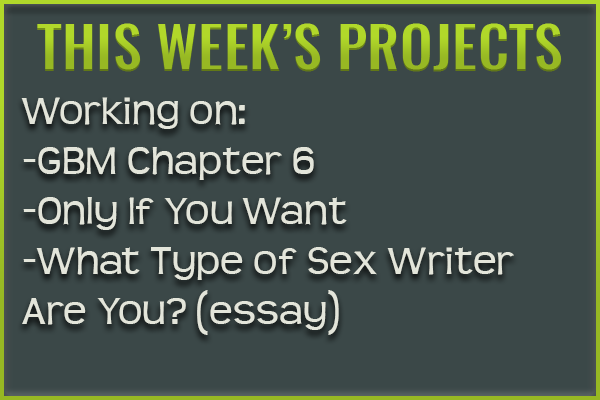 I guess this is more of a universal topic than one limited to just writing smut, but whatever.

Hi! How’s your week been?  I hope it was good. I took a week off last week – I realized that I can write up to 10,000 words in a single day, but usually if I write that much, I don’t like a lot of what I write, and then I usually end up burning myself out. To make sure that doesn’t happen, I wanted to make sure I gave myself the space and time needed to stay able to writing consistently. I have a few mechanisms to my writing, and one of them is using instrumental music to help capture feelings of my writing.

I think I touched on this in my Q&A after BMS was finished. I had really gotten into Two Steps from Hell (I used their song Professor Pumplestickle while writing that whole episode about Megan seducing her teacher and Adam being furious about it) and Epic Mountain, which I still listen to to this day. I kind of have grown out of TSfH, just because I’ve found its style a bit repetitive. That said, I still use a lot of instrumental music in my writing, whether it be Epic Mountain (Which I listen to a lot of the time when writing GBM), video game music, or even just random instrumental songs. Amy’s Fantasy was written while listening to Bruno Mars’ Grenade, instrumental version, and I listened to Stressed Out‘s instrumental version by Twenty-One Pilots while writing Panopticon. Stressed Out in particular really helped give the weird detached almost creepy-feeling vibe to Panopticon with its use of theramin-like synths.

Music can really help set a good stage for erotica, but it can also distract just as easily. On a whim, I might want to turn off all music and just focus, and often times that turns out to be an effective strategy for productivity. Like all aspects of writing, I think experimentation is key here. I can only assume there’s a few of you out there that have certain strategies involving sound when you’re writing, whether it’s smut or not. Maybe I’m weird for listening to music at all in the first place. I hope I’m not the only one that hates music with lyrics when I’m writing. For the life of me, I’ll never know how people can multitask like that.

This was a small thought-topic that popped into my head while writing my latest essay, which I hope to have out this week. Note: Essays do not, and will not, count as Patron-fueled pieces. Only stories will. I hope people don’t mind the shorter blog post this week – I would prefer to direct my energy towards erotica writing; I have an entire week to make up for. I’ll talk to you all next week.