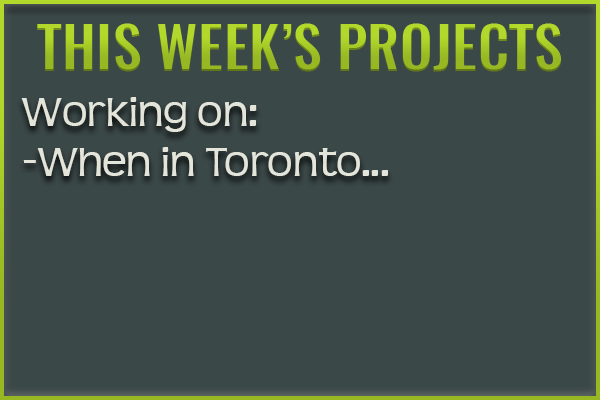 The latest Patreon poll ended in a tie, and in the end, I decided to go with a standalone story to help with the transition into other stories. When in Toronto will just be its own story without chapters, unless something truly unexpected happens while I write it.

Going from one story to another is really weird for me. When I first started The Good, the Bad and the Molly, I was about 3/4ths through Being More Social, and to be honest, I think it was a bit of a mistake. I wasn’t focusing on the story in front of me, and I was trying to tell two stories containing two sets of vastly different characters at once. After I realized how weird it was for me, I committed myself to write one story at a time, to the best of my ability. Some writers have the ability to seamlessly go from working on one story to another, but I don’t.

Sometimes I’ll get flashes of inspiration and work on something else. Breathe was written over the course of three days, and it probably would have been written much quicker than that if my housemates didn’t insist on blasting mumblerap from noon to three in the morning six days a week. (If I thought I hated mumblerap before, I despise it now.) But even then, that’s my mind essentially deciding without my consent that for the moment, I’ve dedicated myself to writing and finishing this one story.

Going from one story to another gives me a kind of whiplash. If I’m really deep into writing Nicole’s dialogue and I suddenly have to write Molly’s or something, I’m going to come out of it knowing both of the characters a little worse, which makes for slightly worse writing. The thing I want above all is for my writing to always be of the best quality I can provide so that it’s pleasing to my viewers. I know a few of my readers call me a shill for constantly plugging my Patreon, but the truth is, if I were in this for the money, I would lock my stories behind a paywall and occasionally let one mediocre story through. They’d be locked behind Patreon posts, or sold on Amazon. A lot of erotica authors do this. It’s completely legitimate to do it. It’s just not how I work.

I’m in a very difficult position in terms of getting the word out there. I want to write as much as I can and get stories out there quickly, but I’m a diagnosed low-functioning victim of depression. I don’t want to lock my writing behind a paywall, but I’m not financially secure and have to ask the help of patrons. I want to tell as many stories as possible, but working on more than one gives me a kind of whiplash where I lose sight of the characters. I guess I’m like a method actor where I need to really feel the character, but instead of acting, I write it. One more interesting thing for me to know going forward, I guess.

How do you write? Do you focus on one story, or are you able to jump from story to story? Do you have things that weigh down your writing process too? It can be a slog, but hey, finding out about ourselves as writers, and even readers, can only help us create better written works ion the future. I’ll talk to you all next week.